Visual Communication Design
Overview
This project focuses on how the visual presentation of text affects the audience’s understanding of content. To more deeply understand the different aspects of using typographic variables, I conducted a series of exercises to present text as a poster. The topic I chose was a one week Keanu Reeves showing at Row House Cinema, a movie theater in the heart of Pittsburgh’s Lawrenceville neighborhood.
Project Timeline
February 2020
Tools
Print Design
Typography 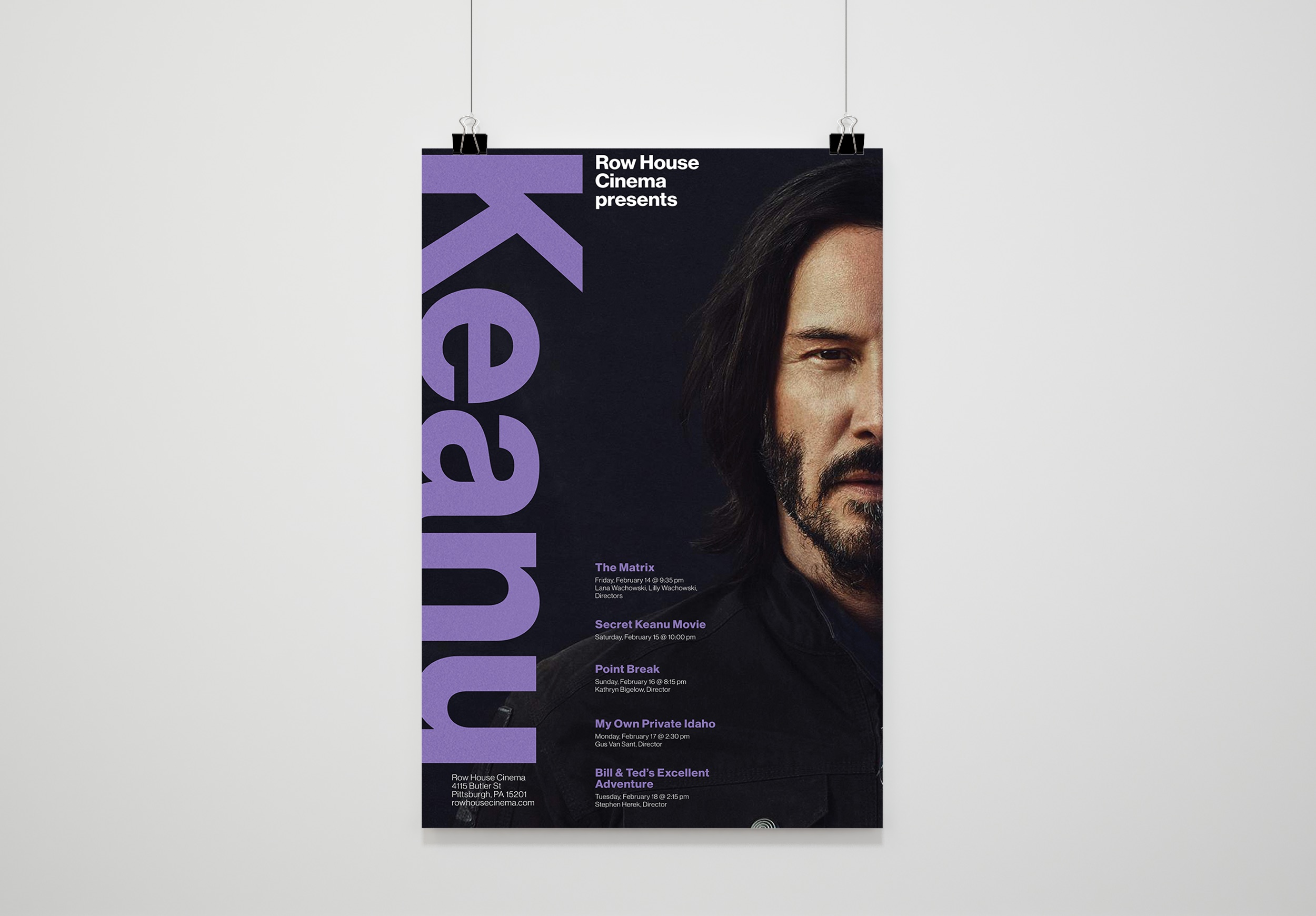 Building on basics to create an effective design.

The first iteration of only using line spacing, stroke weights, and horizontal shifts to compose the content was interesting because I didn’t think that there could be so many different ways to layout the content just by changing such simple aspects of the typography.

The second exercise of using all the previous variables as well as scale started to introduce a more prominent hierarchical structure. For example, in one of the posters below, “Row House Cinema presents” is scaled bigger and is intentionally done that way to draw readers to the title at first glance. 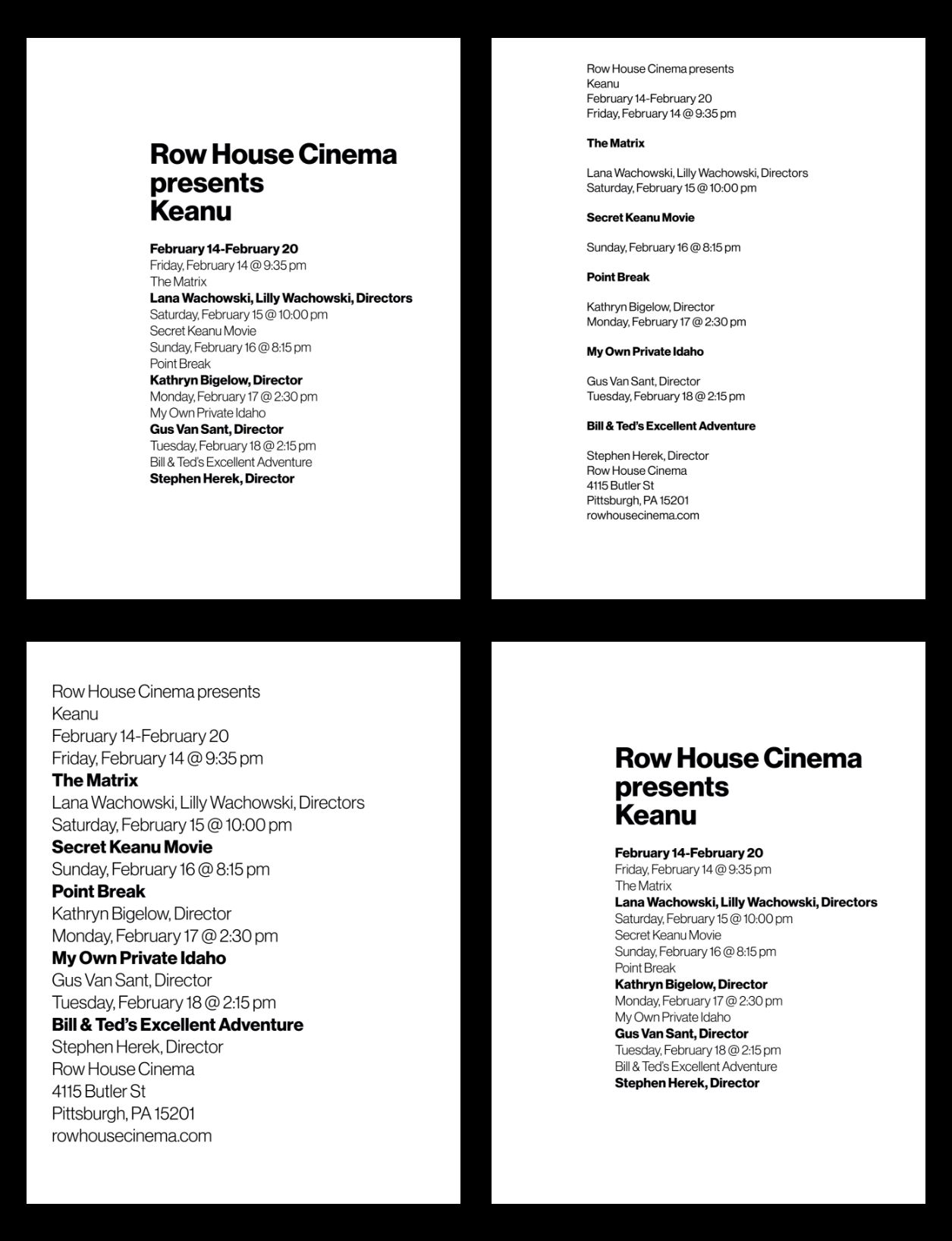 I wanted to use colors that are normally associated with movie theaters like red, black, and yellow. I also started manipulating the text, even more, to expand to the edge of the page or move the text to unconventional places on the page. During a feedback session, we talked about how if my posters were to be posted on a bulletin board surrounded by a sea of other similar colored posters, they probably wouldn’t stand out as much. This got me thinking about context and how in my next iteration I should experiment with other colors. 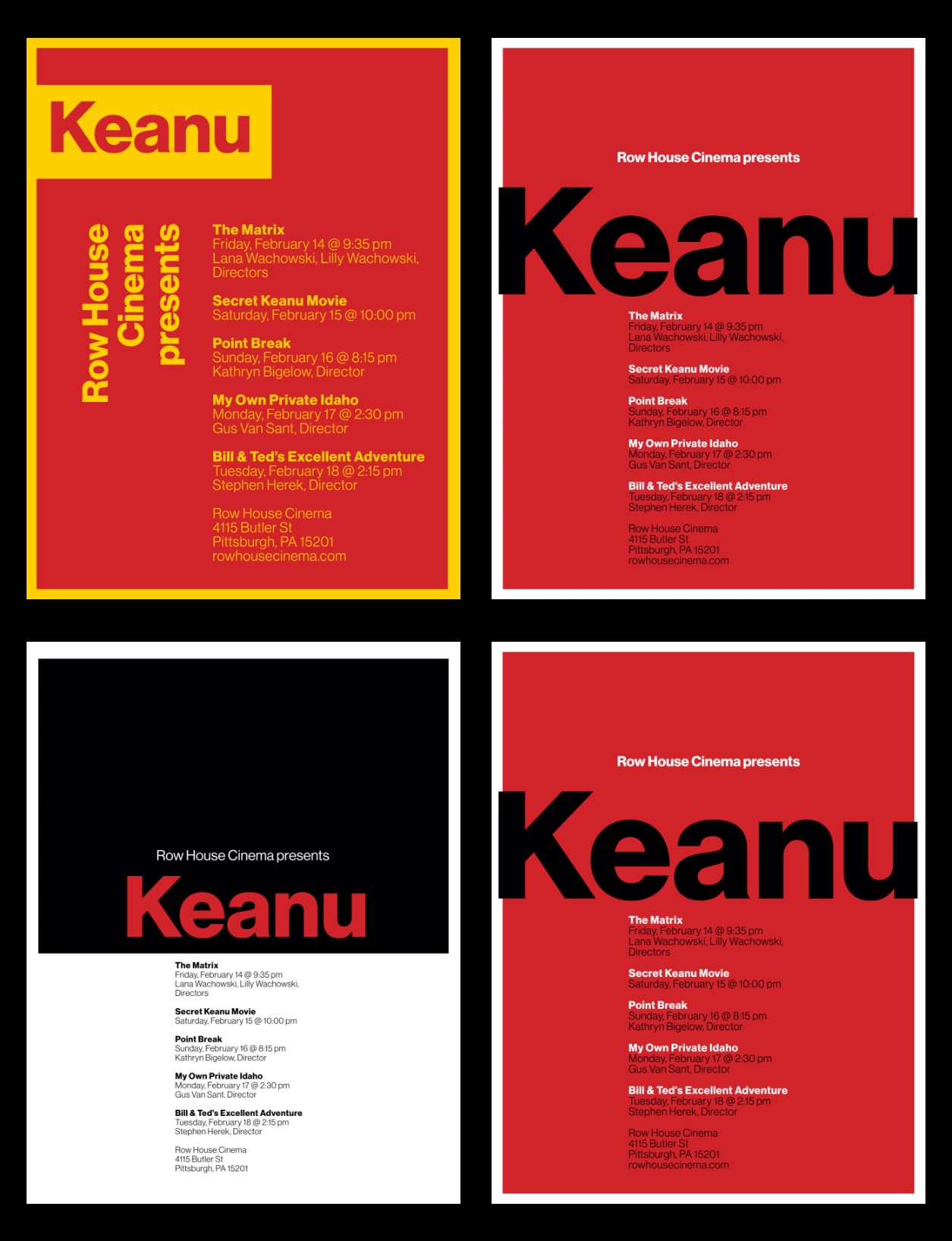 I wanted to experiment with images related to both movies and Keanu. The posters below show objects that are usually associated with films or movies. I particularly liked the projector picture and the way that the light shines down for the audience to read from Keanu down to the location of Row House. I also tried using the film in the second poster as a way for the audience to follow their gaze from the top of the roll of film to bottom. In the other versions, I also created a background in Photoshop from the green color used throughout The Matrix. I really loved the way the background looked on my computer but realized that the green probably wouldn’t show up as well as I would want if printed. 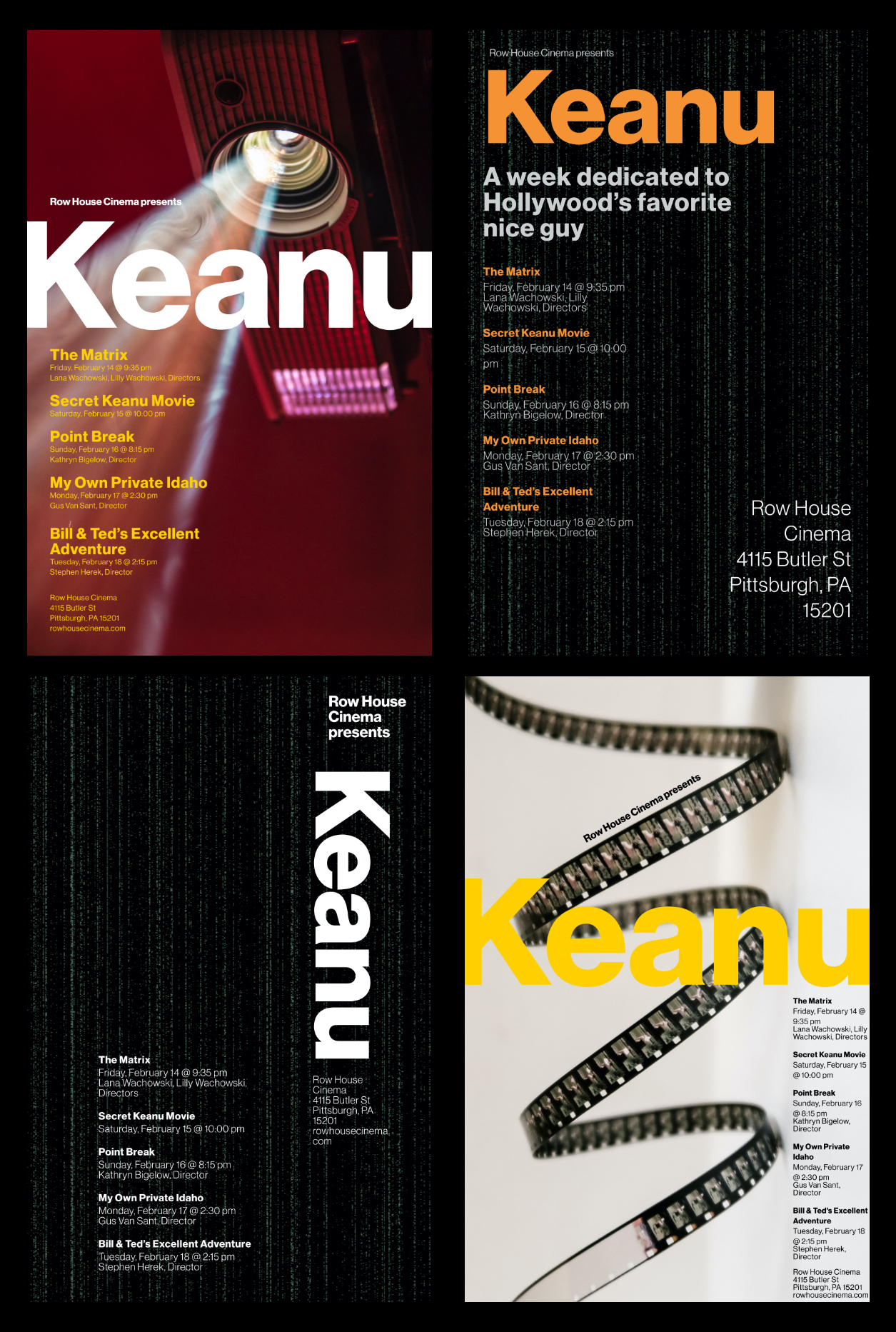 Although I received positive feedback about the green Matrix-y background as a possible final background to use, I decided to continue experimenting with other images related to Keanu. Some of the feedback I received was that the lit side of his face is more intriguing to look at and to take advantage of the negative space near Keanu’s face. As for color, based on the image that I chose I thought purple fit nicely with the background color. I also experimented with green to still bring in a reference to The Matrix. However, I decided to stick with purple because the green didn’t look consistent with the feeling of the image since green conveyed a more playful feeling which contradicts Keanu’s serious face. 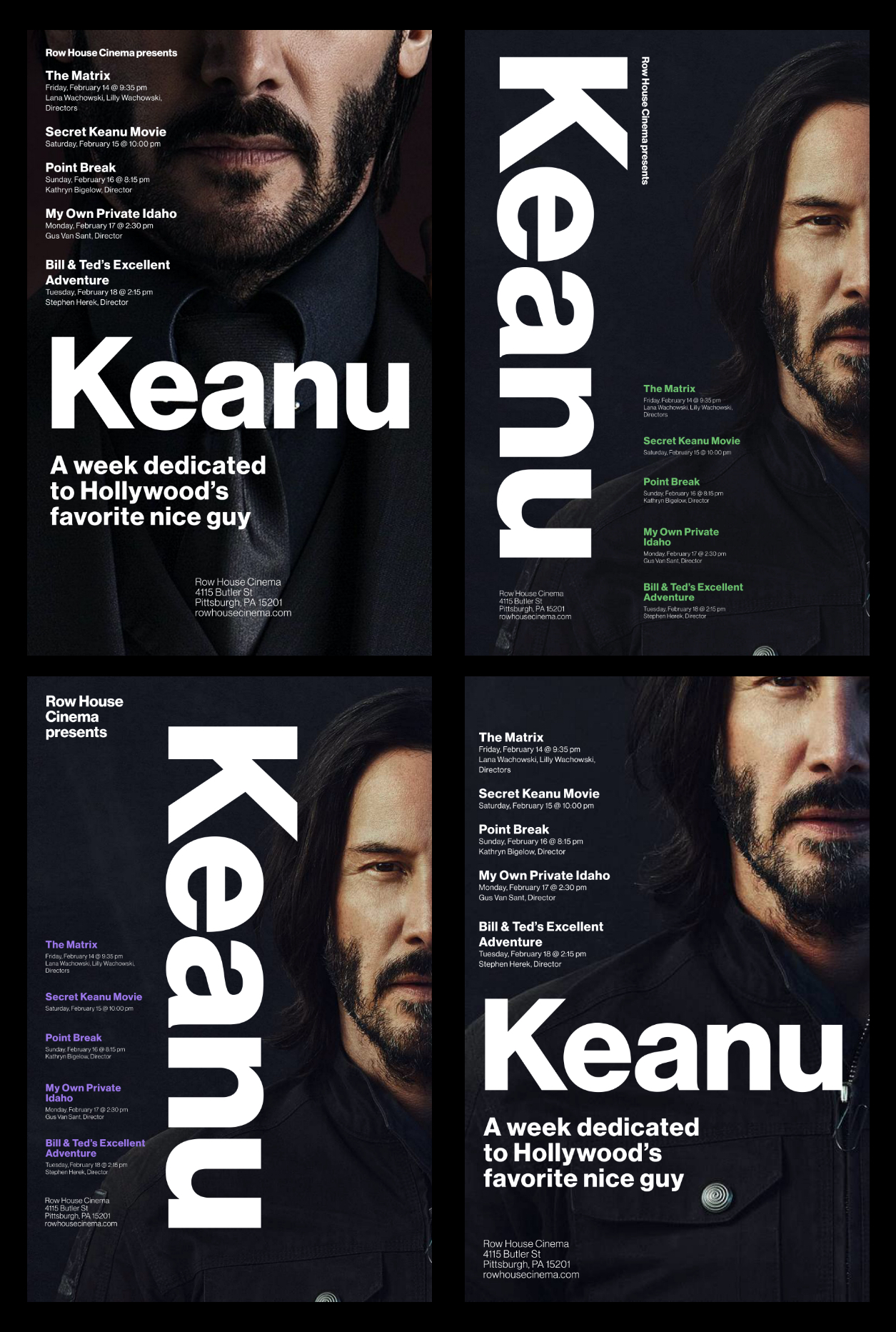 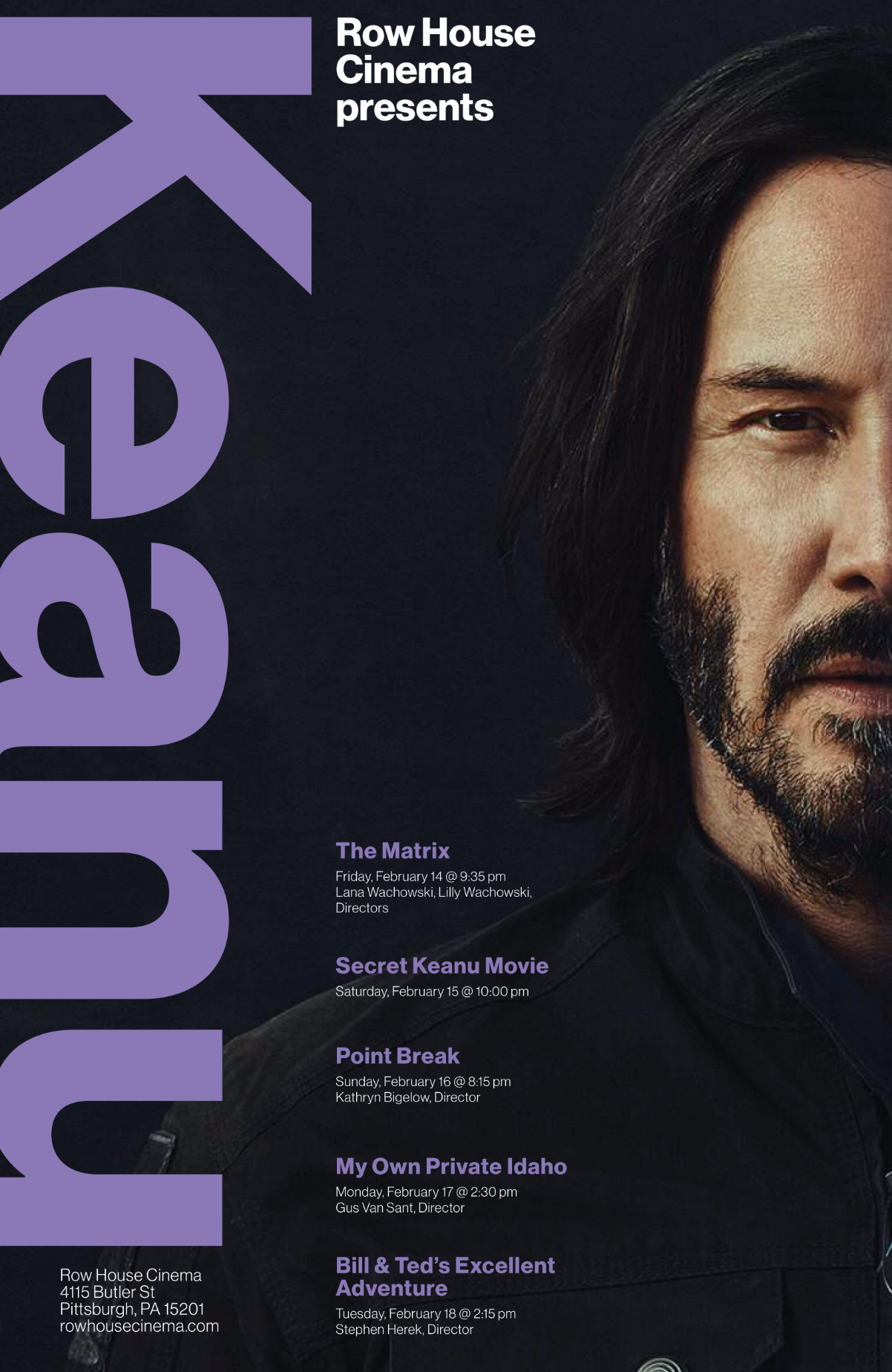 Back to TopNext Project

Final Poster Design
After testing with different people, I chose this version of the poster because expanding the “Keanu” off the page had the most positive feedback. I also chose to scale the “Row House Cinema presents” text because the text was barely readable from a distance during our critique session; I realized that other than “Keanu”, I also want readers to be able to see that this poster is related to Row House at a distance. Overall, I enjoyed this project because I was able to learn more about the different aspects of print design and how to incorporate typographic variables into how information is constructed.